The Major Cause for Bees’ Habitat Loss 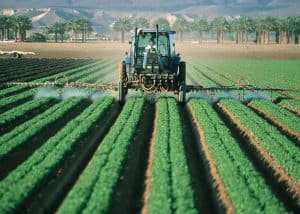 In the last century, modern farming, agriculture and other industries have created significant stressors that damage the health of bees and other pollinating insects, also identified as pollinators.

Pollination is an important activity that bees carry out for humanity. Discover here what pollination is.

Let’s take a step back in history and go to the time after World War II. This was the time before modern farming. The time, in which people did farming in a traditional, natural way.

In this era, we started an agricultural revolution. We changed our farming practices to produce more food and at the same time, minimize costs.

Let’s find out the details.

After World War II, we transformed areas with fertile soil into towns, croplands or lands for livestock.

Bees and pollinating insects lost vast areas of vital food sources due to this massive transformation1http://www.pollinator.org/PDFs/OPERAReport.pdf.

Why is fertile soil so important for bees?

Bees need exactly this variety of natural nectar and pollen sources to prevent nutritional deficiency and to strengthen the immune defenses of the colonies.

What about wild bees and other pollinators?

Up until now, we’ve been referring to domesticated bees. The habitat loss also affects many other pollinators, e.g. wild bees, butterflies and flies. Wild bees depend on the existence of singular wild plants, while honey bees can use a variety of plants as food source. Therefore, habitat loss can have more dramatic consequences for wild bees than for honey bees.

Do you know what clover and alfalfa are? 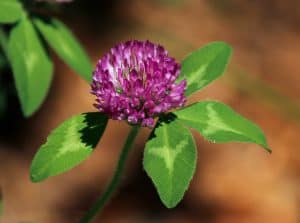 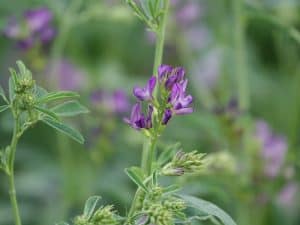 Clover and alfalfa are so-called “cover crops”. They used to be planted as natural fertilizers with multiple benefits to agricultural soil and crops. For instance, their presence increased the nutrients in the soil.

Their function is to keep the soil and groundwater clean and to produce food sources for bees and pollinators2https://www.sare.org/Learning-Center/Books/Building-Soils-for-Better-Crops-3rd-Edition/Text-Version/Cover-Crops/Benefits-of-Cover-Crops.

Before WWII, cover crops were widely used in agriculture. After the war, the farming industries started using synthetic fertilizers. These new fertilizers eventually replaced cover crops and their benefits to bee populations.

Not only was this replacement a bad idea for bees and pollinators, it was also a questionable choice.

Let’s find out why we started using them: Unlike organic fertilizers (e. g. animal wastes, crop residues, compost and cover crops), synthetic fertilizers have an immediate impact on soil. This is especially important for dying or malnourished plants in a non functional ecosystem.

Synthetic fertilizers don’t require time to form, you just put them and the effect is right there and visible. Imagine, it’s like having a magic liquid that adjusts imbalances in no time. After World War II , the use of synthetic fertilizers increased crop yields and paved the way for a powerful agricultural revolution3agricultural revolutionhttps://www.researchgate.net/publication/283500340_Synthetic_Fertilizers_Role_and_Hazards.

If synthetic fertilitzers are that helpful, why should we condemn them?

The problem of synthetic fertilizers lies in their toxic composition. Often, they are based on synthetic nitrogen, phosphate or potassium. Here is why this is not something desirable for our soils:

At that time our new modern cultivation system had another enemy… weeds (but the weed problem is still present today)!

We started using herbicides to kill weeds on farmland. This idea unfortunately had two gigantic disadvantages:

First, many weed species are flowering plants used by bees as food sources.

Much worse, however, is the high level of poison in these substances. Herbicides kill unwanted plants and are therefore highly toxic for the entire environment, including the world of insects. One media-infamous herbicide product is glyphosate.

Researchers found that glyphosate does not kill bees directly, but severely impairs their ability to collect nectar or orient themselves. This reduced ability often kills the entire bee colony, because the nectar procuring bees do not find their way back to their colony.4https://jeb.biologists.org/content/217/19/3457

4. The ongoing trend of monocultures

Have you ever seen pictures of the infinite almond tree farms in California? Or rapeseed crops in Germany? 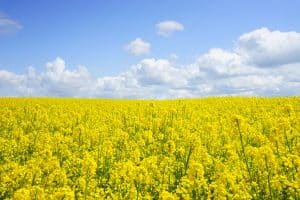 Endless rapeseed fields. Areas with only one plant species are "food deserts" for bees except for a few weeks (flowering season) in the year.

Both the almond farms in California and rapeseed crops in Germany represent large scale agricultural monocultures of our modern times.

What is a Monoculture?

Monoculture is the cultivation or growth of a single crop especially on agricultural or forest land at a time. It is the opposite of polyculture, where more than one crop is grown in the same space at the same time5https://www.sciencedaily.com/terms/monoculture.htm.

Why do we tend to grow monocultures rather than polycultures?

What is the problem with monocultures?

In the last decade monocultures became geographically bigger. The farms that used to have large plant diversity now have acres and acres of the same crop.

The flowering period of a plant is usually once a year for just a few weeks. In this period, bees could potentially live and survive as food sources are rich and available.

But what about the rest of the year?

During the rest of the year, the land becomes a “food desert” and a graveyard for any pollinating insect.

Monocultures with insect-pollinated plants do provide a food source for bees but it is an extremely monotonous and nutritionally limited source. While bees require floral diversity to ensure the health of the colony. Like us humans! Just imagine having to eat only white rice or pasta for the rest of your life… Your body would develop many problems because of the nutritional deficit!

So, in short, monocultures reduce the variety, quality, and quantity of food of our bees and are therefore is one of the major drivers of habitat loss and bee extinction. 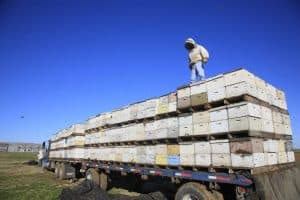 A truck with 440 hives, ready to be shipped to the next flower destination.

There is another problem with monocultures. Imagine a land where only one type of plant grows. Can there exist a fully functioning fauna and flora in such a place? The simple answer is… no.

In the case of wind-pollinated plants such as corn and cereals, the missing fauna is not a problem, since these plants are self-pollinating. They do not require the help of pollinators for their reproduction.

However, for insect-pollinated plants, such as a lot of fruits, nuts and vegetables, the fauna (the insects) plays a big role in reproduction and fruit forming. The pollinators these plants rely on for pollination are completely missing. To give an example, almonds and apples cannot develop from almond or apple flowers if there is no bee involved that carries out the pollination service.

To sum it up: Insect-pollinated monocultures require hundreds of thousands of bees to ensure a productive harvest.

So what did humanity invent to solve this problem?

Here is how it works: Bee hives are shipped to cropland during flowering seasons and shipped out when their pollination job is done.

Hundreds of commercial beekeepers relocate their bees across long distances to force their bees into the pollination periods of flowering crops.

In February 2016, there were 2.66 million managed bee colonies in the United States of which 1.8 million (this is more than a half of all U.S. bee hives) were transported to California for almond crop pollination6https://entomologytoday.org/2017/04/10/why-human-behavior-is-hurting-honey-bees/.

And while bees ensure the mass production of our food through pollination, they are exposed to something even more dangerous:

6. Last but not least: Pesticides

Bees are exposed to pesticides which disturb chemical connections in their brains.

Pesticides are often suspected as the cause for the death of bees. Many pesticides that are used on bee-pollinated crops are toxic to bees. They are exposed to pesticides such as neonicotinoids among others.

Why do we use pesticides in the first place?

As we stated before, monocultures do not represent a healthy ecosystem. Therefore they also lack natural self-defense against invading insects.

When there is no diversity or “animal food chain”, a land is not able to naturally balance the amount and variety of insects. Consequently, there is an excessive amount of pests and unwanted insects. This unbalanced presence of bag agents leads then to the of pesticides.

Farmers usually spray the pesticides in the morning. Unfortunately, this is exactly right before bees fly out of the hive to get to “work” and therefore they get the full dose of pesticides.

What happens to bees when they get in contact with, eat or transport pesticides?

Pesticides are water soluble and “systemic”, this means that their exposure to insects can occur in all parts of the plant, including pollen and nectar.

When assessing the deadliness of pesticides, tests commonly focus on finding doses of pesticides that are lethal to bees. However, mostly it’s the sublethal doses that lead to problems at the colony level, even if the effects are less visible:

Pesticides on sublethal doses disturb chemical communications in insect brains, leading to disorientation, disturbance in the communication (dancing communication) and general weakening: worker bees, in particular, causing them to bring less food in the hive or not able to find the way back home. Thus, the honey production decreases and the survival of the hive becomes critical7https://de.scribd.com/document/252121365/7-Colony-Collapse-Disorder-Have-We-Seen-This-Before-Robyn-m-Underwood-and-Dennis-Vanengelsdorp.

Interestingly, neonicotinoids – the largest group of pesticides currently used in agriculture is supporting a multi-billion-dollar-industry in both the USA and Europe.

More often than not, the same producers of pesticides also produce fertilizers and seeds.

We made the life of bees and pollinators miserable. Our so-called “progress” in agriculture is an escalation of increasingly worsening living conditions for both fauna and flora.

Then, we cut the most important plants for the survival of insects on cropland by replacing cover crops by industrial fertilizers.

In addition to that, we poison the soil and crops with pesticides and herbicides to keep the unwanted insects and weeds off the crops.

On top of that, we put bee hives on trucks to carry them on long distances from one monoculture flower land to the next.

Bees are struggling. And the reasons for this struggle are more than evident.