CAUSE #4: WiFi and electromagnetic radiation 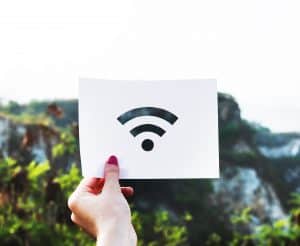 WiFi radiations are more and more diffused all over the globe. Some researchers believe that this causes orientation problems to bees.

To understand how the use of WiFi relate to bees, we need to know two fundamental facts:

1. How do bees navigate?

According to the researcher team of the University of Vancouver 1https://physicsworld.com/a/honey-bees-navigate-using-magnetic-abdomens/ consisting in both physicists and biologists, honey bees appear to sense magnetic fields using a magnetic structure in their abdomens.

Also another researcher team confirms that bees produce tiny molecules of magnetite in their bodies, known as “magnetoreceptors“, which they use for orientation and comb building.

The Canadian study went even further and used strong permanent magnets on bees to study their behaviour. Here is what they found out:

1. Ferromagnetic material consistent with magnetite exists in the abdomen of honey bees.

2. The ferrmagnetic material can be magnetized using a strong permanent magnet.

In conclusion we can say that the sensoring ability of honey bees can be disrupted when using a strong permanent magnet. Read the full article here. 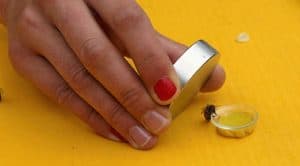 In this experiment, a honey bees is magnetized with a permanent magnet. (Courtesy: G Gries / SFU)

2. So bees do have a reaction to magnetic forces. What does that have to do with our WiFi?

According to the physicist Richard Feynman, “an electromagnetic field (also EMF or EM field) is a physical field produced by electrically charged objects3http://www.feynmanlectures.caltech.edu/II_01.html#Ch1-S2“, just like cell phones and WiFi adapters and routers.

In other words: Smartphones, WiFi adapters and routers are objects that produce electromagnetic fields.

Now you are ready for the WiFi-impacts-bees-theory:

The impact of electromagnetic radiation on honey bees

There is a theory stating that the presence of certain wavelengths of electromagnetic fields may resonate with some bee tissues. This resonance would disturb the bee’s ability to find their way back to the bee hive.

The science world is divided about this statement.

Here are the counter-arguments:

Honey bee loss is not happening proportionally to the steady increase of cell phone and other electromagnetic transmissions.

The researchers argue that honey bee loss occurred also in areas without cell phone reception. In addition, many hives situated near cell phone and radio towers, and under electrical transmission lines still thrived without disturbances4http://scientificbeekeeping.com/sick-bees-part-18c-colony-collapse-revisited/
5https://www.researchgate.net/publication/277616408_Electromagnetic_Radiation_And_Bees_Again.

Some researchers came to the conclusion that the electromagnetic fields produced by our technologies are not a threat to bees as they operate on a different frequency.

And here are the pro-arguments:

The researchers on this side argue that electromagnetic fields play a key role in the life of honey bees and here’s how this statement is backed by:

Studies of 2013 have found that bees are repelled by cell phone signals or have acted erratically around cell phones as if confused by the signals. After keeping a mobile phone for a period of one month next to the hive, and by making a fifteen-minute call each day, it was realized that the number of bees inside the hive decreased. The beekeeper estimated that more than 50% of the bees were lost. The eggs were also not transformed into larvae.

Based on theses results, there seems to be a clear connection between mobile phone radiation and honey bee navigation system6https://www.researchgate.net/publication/246044829_The_Effect_of_Cell_Phone_Radiations_on_the_Life_Cycle_of_Honeybees.

There is no clear-cut scientific consensus about the accuracy of the theory. We invite you to draw your own conclusions based on the pro and counter arguments.