Honey bee loss is the declining number of colonies within honey bee (Apis mellifera) populations.
We are losing huge numbers of honey bees in the recent years and all over the world.

Here are the numbers worldwide:

In the USA, people came up with the term colony collapse disorder (CCD).
CCD affects managed honey bee colonies. It describes of a rapid loss of adult worker bees.

Since adult worker bees are responsible of the majority of the hive tasks, their absence causes the dead of the entire colony.

In the USA during 2007-2014 a substantial percentage of winter colony losses (20,5-60%) seem to have as their cause the symptoms compatible with CCD9https://www.researchgate.net/publication/282211157_Colony_Collapse_Disorder_CCD_A_Review_of_the_Possible_Factors_and_Agents_Involved. Other sources report losses of 30% to 90% in the USA10https://www.researchgate.net/publication/246044829_The_Effect_of_Cell_Phone_Radiations_on_the_Life_Cycle_of_Honeybees.

In Europe, researchers reported the loss of approximately 30% to 50% of honey bee colonies, depending on the country11https://www.researchgate.net/publication/246044829_The_Effect_of_Cell_Phone_Radiations_on_the_Life_Cycle_of_Honeybees. Some countries are less affected than others. It is difficult to make e one-fits-all statement for the whole European continent, since every single country has his own regulations and behaviours.

The following graphic helps to understand the differences: 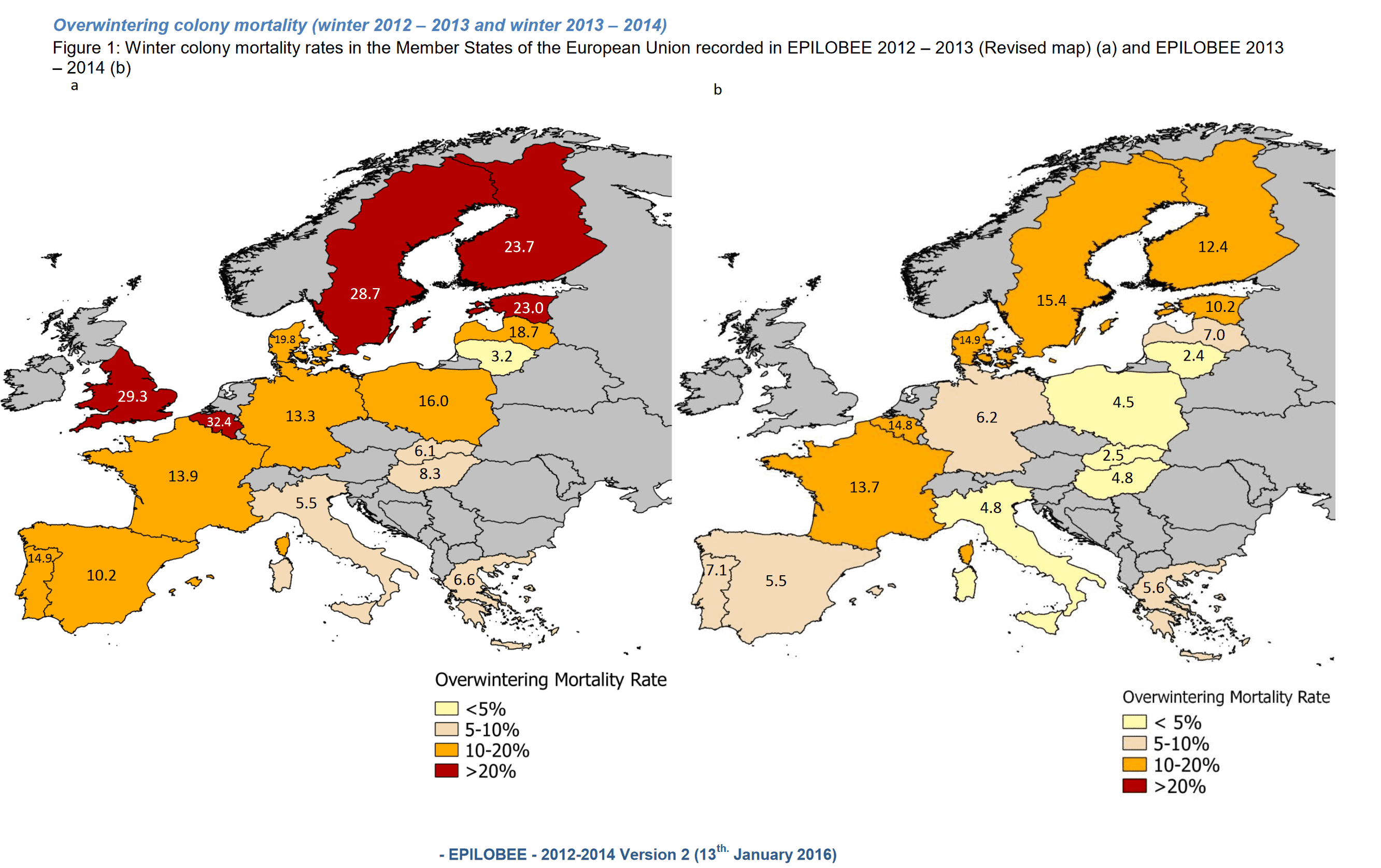 This graphic of the official EPILOBEE report of the European reference laboratory for honey bee health demonstrates the honey bee losses in European countries during the years 2012-2013 and 2013-2014. While in some countries the mortality rates improved significantly (Spain, Sweden, Finland, Germany) other countries rates worsened in this time span (France, Italy).

Honey bee loss in other parts of the world

At this moment, we could collect precise numbers only for the U.S. and Europe. On those continents, researchers monitor and report the losses of honey bees thoroughly12OPERA Bee health working group: Bee health in Europe- Facts and figures http://www.pollinator.org/PDFs/OPERAReport.pdf.
We provide the following information about other parts of the world, such as South America, India, China and Africa:

The only published data on colony losses in were reported in Brazil, Uruguay and Argentina. Those countries report honey bee losses of about 30-50 % every year13https://www.apidologie.org/articles/apido/full_html/2010/03/m09133/m09133.html. However, there are only few scientific resources about the loss of honey bees in South America.

Four out of the five principal honey bee species live in India, reflecting a relatively healthy biodiversity. An estimated 75% of the Indian honey production comes from the wild Giant honey bee Apis dorsata, the second largest of the honey bee species. Sadly, India’s Apis dorsata numbers have dropped by 20 percent in just 10 years. Experts blame environmental pressures like deforestation and forest fires. Another reason is the importation of Western honey bees and their accompanying pests, which end up infecting wild hives14https://asiancorrespondent.com/2016/02/why-asia-should-worry-more-about-its-honeybees-than-its-tigers/#fYceYKbFfW7rczuY.97.

In southwest China, excessive pesticide use has wiped out numerous wild bee populations that used to pollinate apple and pear orchards. Today these areas require labor-intensive pollination by hand, using paintbrushes, a practice only viable for more profitable crops15https://asiancorrespondent.com/2016/02/why-asia-should-worry-more-about-its-honeybees-than-its-tigers/#fYceYKbFfW7rczuY.97.

According to Dr. Baldwyn Torto from the International Centre of Insect Physiology and Ecology (icipe), based in Kenya, the situation especially in Kenya is becoming similarly problematic like in Europe and the USA.: “As forests are cleared for agricultural production and bees are exposed to pesticides, beekeepers have reported a decline in bee numbers. This is reflected in the fact that Kenya, which once had a rich supply of indigenous honey, is now a honey importer.”16