Everything you should know about honey 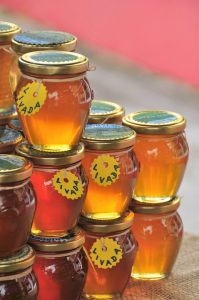 What exactly is this golden liquid in jars, you may ask.
Well, honey is an unbelievable all-round product for human health made by bees.
Let’s find out why!

Research has shown that honey possesses anti-inflammatory, antibacterial and antioxidant effects and enhances athletic performance.
Today, the most popular use of honey in healing is its application on wounds, burns and infections on the skin, mitigating effects on gut and stomach issues and has antibacterial effects when catching a cold1https://www.webmd.com/diet/features/medicinal-uses-of-honey#2.

Do you want to know more? Let’s learn some interesting details.

Treatments of wounds, burns and infections

The antiseptic, antimicrobial and antibacterial properties are known to effective in wound healing and honey is used for the treatment of burns, wounds and ulcers.
It has been shown that honey applied topically for conditions such as acne may be beneficial.
For burns and wounds, honey is directly applied to the damaged area or in a dressing that is changed every 24 to 48 hours. Honey-infused bandages are known to aid healing. Researchers also found that honey reacts with the body’s fluids to make hydrogen peroxide, creating an inhospitable environment for bacteria. It has also been noted that dirt is removed with the bandage when honey is used as a dressing, leaving a clean wound.
For ulcers, it may reduce size, pain and odor of problematic skin ulcers.
Honey’s action is effective even in treating Fournier’s gangrene where a rapidly spreading erupting infection must normally be treated by aggressive surgical removal of the infected tissue. The golden liquid stops the advance of the infection without the need to remove dead tissue.
Thyme and lavender honey is regularly used for treatments in a hospital in Limoge, France2https://www.lepopulaire.fr/limoges/economie/agroalimentaire/2016/11/29/le-miel-utilise-au-chu-de-limoges-pour-ses-bienfaits-cicatrisants_12187651.html.

Treatments of the common cold and immune system issues

Honey is traditionally used for treatments of colds and sore throats. The soothing and calming effect on the throat and its antibacterial, antimicrobial properties make it well suited for this purpose. Some researchers and doctors claim buckwheat honey to be the most effective honey for throat issues3https://www.healthline.com/health/buckwheat-honey#bottom-line.
Moreover, the prebiotics and oligosaccharides in honey might boost the immune system.

Treatments for issues with stomach, gut and digestion

Since early human history honey has been recommended against diarrhea and gastro-intestinal disorders such as ulcers, gastritis, gastroenteritis. It is also known as a potent inhibitor of Heliobacter pylori.

On the other side, for some people the consumption of large amounts (more than 80 g) of honey can have minor laxative effects. In Eastern Europe, honey is used to treat constipation.

Best honey for stomach / gut issues: any honey seems to be fine, as long as it is raw honey of a good quality

For athletes, honey is available under the form of gel and powder and is used as a fast-absorbable carbohydrate.
Research has shown that honey is well tolerated by athletes and can be an effective carbohydrate source for sports performance.
During the performance, it increased significantly the heart frequency and the blood glucose level without causing physical or psychological signs of hypoglycemia.
In another trial the effect of glucose and honey gels were compared:
Both gels increased sports performance, but the effect of honey was slightly better than the one of glucose!

You think that this sweetener is full of carbs? You are right! Carbs make up 95% of honey, mainly consisting in fructose and glucose but also of 25 different oligosaccharides.
The magic happens when these 95% come together with the further amounts of proteins, enzymes, amino acids, minerals, trace elements, vitamins, aroma compounds and polyphenols which make up the remaining 5%.

The glycemic index varies within a wide range from 32 to 85, depending on the plant source.

This is still lower than sugar (sucrose) having an GI of 60 to 110.
In addition, some honeys, e.g. acacia, with relatively high concentration of fructose, have a lower GI than other honey types4https://www.researchgate.net/publication/23803275_Honey_for_Nutrition_and_Health_A_Review.

How much honey is good for you

You should never exaggerate with the consumption. The dose of honey is key.
Due to its high carbohydrate content and functional properties it is an excellent source of energy for athletes. In the process of digestion, the principal carbohydrates (fructose and glucose) are quickly transported into the blood and can be used for energy requirements.

Honey can have a variety of positive nutritional and health effects, if consumed at doses of 50 to 80 g per intake and not more.

Learn the resaons why you should stop buying honey in (most) supermarkets and why the crystallization of honey is a good sign.
Let’s speak about pasteurized or processed honey first.

It is the kind of honey being sold by big brands and corporations and it is also the honey you find in most supermarket chains. It appears as a clear liquid and does not crystalize, even if kept extended periods in a fridge.

Think about it. How can this be?

Let’s explain it by understanding what raw honey is.
Raw and minimally processed honey are mostly available by local beekeepers and can even contain some traces of wax pollen and propolis. Some beekeepers strain raw honey more, others strain it less. Still, the honey extraction is usually known as “cold extraction”.
Raw honey does usually crystalize, so if your honey shows tiny white crystals und becomes more and more dense then this is a good sign!

Honey that does not crystalize after 2 weeks being kept in the fridge has been heated to very high temperatures and has lost most of its beneficial health properties. Good bacterial enzymes have been removed in the heating process.
It may look good and it still can be used as a sweetener but that’s it. If you want to know scientific details about crystallization and honey, click here.

Where to buy raw honey

You can get raw honey at your local beekeeper, local health food stores or at farmers markets.  In most cases raw honey is not available in supermarkets.