When super insects fight each other 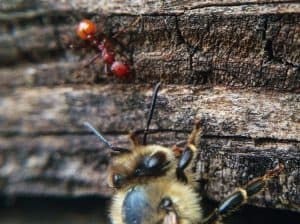 What happens when ants try to attack a beehive?

Bees against ants – the prelude

Most bees are highly social creatures. They have a special body structure and gender to match different roles in building nests, feeding, nesting, breeding and taking care of larvae. A bee cannot sustain life and reproduce alone. Thus, they have very close coordination and are willing to sacrifice themselves for the benefit of the colony.

Not to mention the hard work of pollination, the excellent orientation skills and their ability to inject venom through their sting, when threatened.

But there are some bees that somehow don’t possess the fearful venom weapon. It is a group of non-venomous bees, called “meliponines”, stingless bees. They have small bodies, build nests in the earth cavities, hollows and even crevices of caves. Small and without venom, they are quite gentle.

Another species with elaborated social behavior are the ants. They also possess social characteristics, similarly to bees, like body differentiation and role, solidarity and sacrifice. Bees have a plant-based diet though, while some ant species include animal protein (e.g. larvae of their own or other species) in their diet. Ants eat plants, animals and fungi. Thus, they can be ferocious hunters, when it comes to the survival of their colony.
Smaller than most of their prey, they possess a superior strength compared to their size, sharpness, sting ability and, more importantly, overwhelming numbers along with their stubbornness.

Ants have a specific hunting strategy: attacking, clinging, and continuously injecting venom that paralyzes their prey, cutting prey bodies with sharp mandibles and transporting them to their nests. We easily list a long list of ant’s preys such as worms, grasshoppers, mantis, spiders, birds, but even snakes and lizards …

So, what happens when ants long for protein-rich bee larvae and decide to attack a beehive?

The bee colony’s nest is located in a wooden hive. The long wax parts that formed the entrance made of honeycomb had just been broken in a recent renovation.
An ant colony is living inside a concrete wall, where it formed nests in holes. Some ants were sent out to wander and find new food sources, when they discovered a potential prey.

A honeycomb with lots of honey, pollen and even greasy larvae. It is worth a try…

One afternoon, ants gather a large force outside the beehive and suddenly attack. They manage to separate the bees who were foraging outside from the bees who were inside the hive, isolating them from each other. One ant approaches the entrance, shakes her head and starts probing. The bees emit emergency signals and then flush out all at once like a flood, pushing the ants out.

The bees crawl around the cave door and try to trample the ant to death. But when on the ground, the bees seem to be only big clumsy creatures compared to the war-designed ants.
The ants’ response comes silently, but deadly.
With unseen stubbornness they attack the bees’ legs with their sharp mandibles. Three or four, more and more ants cling to a bee and then try to stretch it to all sides. Most of the bees try to take off, but some can’t escape, their bodies are cut into pieces and taken to the ant nest by worker ants.
Bees seeking to land quickly are repulsed.
The ant colony dominates the ground, but the bees achieved their goal: protecting the hive. At some point, 3 bees stand on the entrance, turning their big and hard-shelled heads to the smaller mandibles of ants. Every time the ants withdraw for a bit, the bees quickly try to seal the gate with new bee heads. The ants want to attack, but find the door closed. The two warrior sides fall into tension.

Waiting for the end…
The sun goes down. The ants are looking forward to the darkness because they are comfortable at night. At sunset, the ant forces are still concentrated in large numbers and waiting for the moment to conquer the hive.

In the morning, when we expect to see the lost bee battle we find a surprising twist. The bees are showing off their intelligence and superiority.

Step by step, they built a beeswax fence to seal the entrance thoroughly. The wax is durable enough to resist the strongest ants.

After some time, the newly wax-sealed gate has been opened and some bees are constantly guarding it.

The ant colony realizes that it can’t gain adequate benefits by continuing to sit in front of the beehive. Gradually, they withdraw, until only a few ants were left wandering around nearby.

Bees start living a peaceful life again. As usual, they work hard, build a bigger nest and get ready for new attacks.

Did you wonder what kinds of honey bee species are out there? Read our article World’s 8 Honey Bee Species.